GENE WIE appears internationally as a conductor, chamber musician, and educator, dividing his time equally between the classroom and concert stage. His performances on violin, viola, clarinet, and saxophone have taken him across the United States, Canada, Europe, and the South Pacific, into major venues like the Sydney Opera House (Australia), the Moulin d'Ande (France), Salzburg Mozartaeum (Austria), and Prague Leichteinstein Palace (Czech Republic). He currently serves as Principal Conductor of the California Solisti Chamber Orchestra.

Since 2005 he has served as Music Director of the Community Youth Orchestra of Southern California (CYOSC), a non-profit performing arts education organization founded in 1990 that provides orchestral training, performances, and community service opportunities for K-12 and college students throughout the Southern California region. Working entirely as a volunteer, he annually assembles a superb coaching staff, mentors aspiring teachers/conductors, introduces students to a vast repertory of both traditional classical as well as new works, and leads the orchestras in four major concert cycles each season.

Gene is Director of the Orchestra Program at St. Margaret's Episcopal School in San Juan Capistrano, California, USA, where he oversees a comprehensive orchestral training program in grades 4-12 that he has continuously developed since joining the faculty in 2006. The program includes a Suzuki String Academy, Piano Academy, string orchestras in grades 4-5, full symphonic ensembles for middle school (6-8) and upper school (9-12), and regular level and honors level academic courses in chamber music. His ensembles regularly perform for Preschool students throughout Orange County as part of an education outreach partnership with the Admissions Office, a "Musical Petting Zoo" that provides hands-on experiences with a wide range of string, woodwind, brass, and percussion instruments. Since 2008 he has also been part of the Computer Science Department, and has taught AP Computer Science A, AP Computer Science Principles, Introduction to Software Engineering (honors), Music Media Programming, and Introduction to Programming in Python.  In the summer of 2013 he joined the faculty of Ardent Academy for Gifted Youth in Irvine, where he teaches AP Computer Science A.

During the past two decades Gene has appeared as first violinist with the Monarch String Quartet and Elegie String Quartet, principal clarinet with the South Orange County Chamber Orchestra, concertmaster with the Blackbird Music Project, and as a viola substitute with the Pacific Symphony Orchestra, in addition to numerous community ensembles. In the field of modern dance, he has improvised/performed on string, woodwind, brass, and percussion instruments for premieres by composers Alan Terricciano and Norman Beede for the American Repertory Dance Company, Saint Joseph Ballet, and UC Irvine Dance, and in classes for choreographers Donald McKayle, Lisa Naugle, and Bonnie Oda Homsey. He has conducted world premieres of works by Jason Barabba (Study in Orange, String Orchestra, 2006), Jesse Green (City of Dis, Vocal/String Quartets, 2007), and A. Terricciano (Evening Prayer from Blue Motions, String Orchestra, 2009), conducted ensembles for musical theater productions at the school and community theater level of which his favorites include Les Miserables, The Secret Garden, My Fair Lady, and Peter Pan, and performed as orchestra leader in numerous college and community theater productions including Victor/Victoria, Beauty and the Beast, Pirates of Penzance, and She Loves Me. More recently, in 2017 he recorded the dance score for Balto by A. Terricciano, for piano trio (piano, violin, cello), and will premiere his own original orchestral work, Resurgence, with the Symphony of Community Youth Orchestra of Southern California in the Spring of 2021 to celebrate the orchestra's 30th anniversary.

Committed to bringing young musicians into the world of chamber music, Gene and his wife Chika coordinate ChamberArtsFest, and he is the Founding Artistic Director of the St. Margaret's Summer Music Festival.  He was previously Artistic Director of the Capistrano International Chamber Music Festival (2013-2016), and served on the Young Artist Faculty of ChamberArtsFest (USA/France) from 2003 to 2009, where he coached, studied, and performed major works in the repertoire with the guidance of artists such as William Fitzpatrick, Peter Marsh, Yoko Matsuda, Robert Becker, and Margaret Parkins. He coached chamber ensembles at the Chamber Music Workshop at Big Bear Lake, led rhythmic training courses at the Viola Workout (Colorado), and spent a decade as a conductor and staff member at Arrowbear Music Camp (California). His musical mentors include William Fitzpatrick, Haroutune Bedelian, William Kennedy, Hong Cheng, and Lori Franke (violin/viola), Amanda Walker and Dorea Tate (clarinet), and Stephen Tucker (conducting). He attended numerous summer festivals as a student and is grateful to have studied with the Blaeu Quartet at the Ameropa Music Festival (Czech Republic), the Miro Quartet at the San Diego Chamber Music Workshop (California), and with Nina Scolnik at UC Irvine. 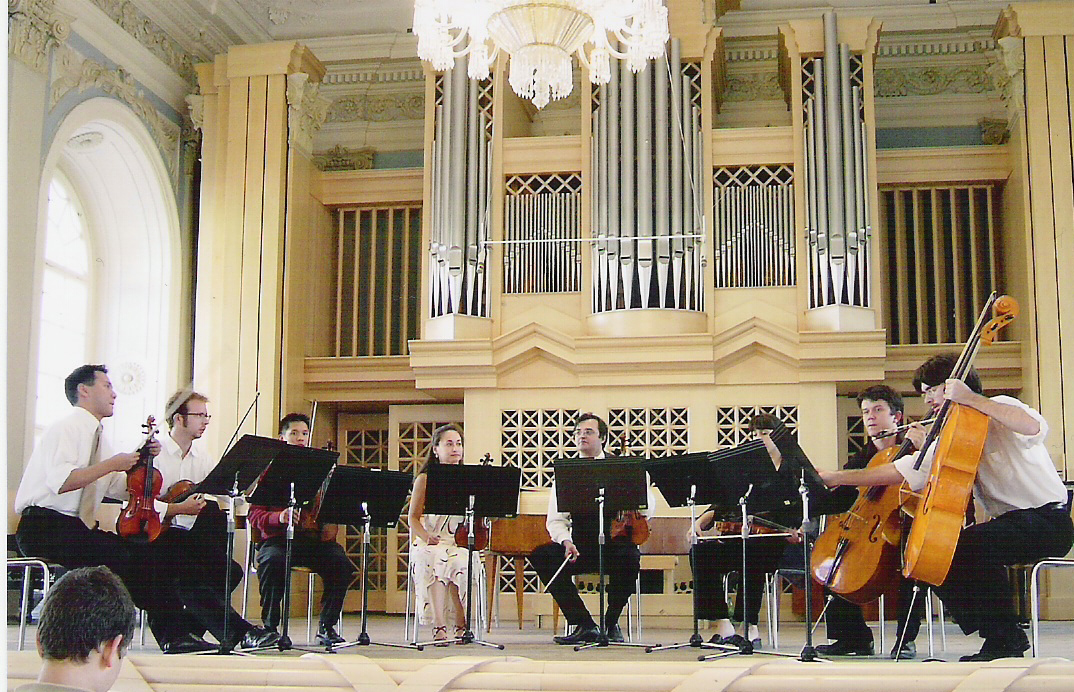 He participated in the 2011 and 2017 Starling-DeLay Symposium on Violin Studies at the Juilliard School in New York, has taught masterclasses for the South Valley Suzuki String Academy in Gilroy, California every year since 2011, presented a session on bow technique development for elementary string students at the Southern California School Band and Orchestra Association (SCSBOA) Elementary Day conference in September 2012, conducted the 2013 Capistrano Unified School District Middle School Honor Orchestra, and presented on Arts Education Technology at the 2016 and 2017 SCSBOA Conferences. In 2018 he appeared as a Guest Artist for Yamaha at the NAMM Show, demonstrating education applications for their new casual wind instrument, the Venova, and in 2020 will serve as the Violin Section Coach for the SCSBOA Elementary Honor Orchestra.

A software engineer turned musician, he earned B.S. Information and Computer Science and M.F.A. Music degrees from the University of California, Irvine. His hobbies include video games (his favorites are Final Fantasy, Starcraft, and Mass Effect), cooking, travel, swimming, and tennis.